Over my 40-plus years of photographing nature this is my favorite.
It captures the glory and power, the wonder and beauty, the magic and spectacle, of God’s creation.

In the summer of 2015 I took my girlfriend, Vicki, to Bryce Canyon National Park in Utah. She had never been there before and when I took her to an overlook, and she saw the canyon for the first time, she was so taken by the beauty she cried.

A few days later, after hiking all throughout the park, we were at that same overlook again. Late in the day, at the Sunset Point overlook, the low sun cast its rich golden light over the “hoodoos” of Bryce Canyon: the bronze, chestnut, and vanilla hues of the rock formations.

Rain had fallen earlier resulting in even deeper tones of the colorful geological features. Arching over the landscape was a rainbow that touched down on both sides and framed the sacred Navajo Mountain, far off. The rainbow, of course, symbolizes hope.

A rainstorm was brewing in the distance, the rain descending in a small pocket of sky. And reflecting up from the landscape, in the center of the rainbow, were shafts of light, like the spokes of a wheel, shooting into the darkened clouds above.

Many people have observed fingers of light coming down from the clouds, especially those of us who live near the ocean, and this is sometimes referred to as the “God effect.” But never in my life had I seen shafts of light shooting upwards!

From Romans 1 (The Message):
But the basic reality of God is plain enough. Open your eyes and there it is! By taking a long and thoughtful look at what God has created, people have always been able to see what their eyes as such can’t see: eternal power, for instance, and the mystery of his divine being. So nobody has a good excuse. 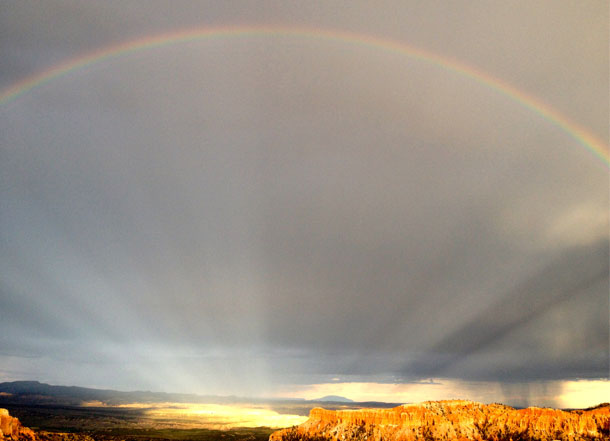