At the end of the 2013-2014 school year, La Roca had to close the doors of its classrooms for the last time. Most of the students that were a part of the school were accommodated for and found new institutions where they could continue their education, but the realities of La Roca's situation caused them to focus their ministry in other areas. All of the former students of the La Roca Tijuana school gathered for a back to school party recently, to celebrate their history with the program and their new paths. 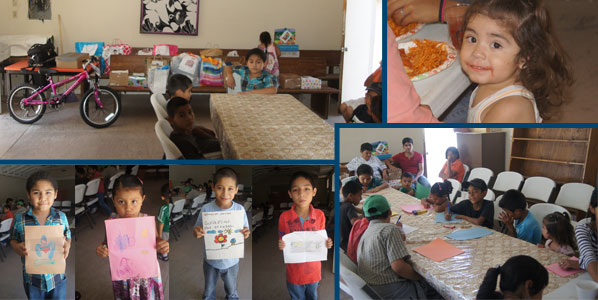 At the party, the students were given presents from a sponsor at Foothills. Each volunteer sponsor was given a wish list of a student to shop for. Our wonderful congregation shopped for them and brought the gifts back to the church for delivery to La Roca by our missionary team. Ross King, from Foothills, met with each student on that special party day and gave them their presents. To the students surprise, they were also given $40.00 american to help with their transition to their new schools. Most of the older students who could commute, had arrangements set up by La Roca to continue at other schools. For the younger students there were unfortunately not many options. But on this day, the students got back together and enjoyed the food, the presents and they were very thankful for the funds. We wish them well during their transition and realize that this is not the closing of a book, but just another chapter in these student's lives.