Also, the word homosexual is used less often today because many feel that the word has negative connotations. Therefore, the more politically correct reference to homosexuals is the acronym LGBT (or variations thereof such as LGBTQ). The acronym stands for lesbians (female homosexuals); gays (male homosexuals); bisexuals and trans-gendered. The letter Q is sometimes used to refer to those who are questioning their sexual identity. The acronym most commonly used is LGBT.

The acronym, LGBT, first entered into widespread use in the 1990s. It was part of a general sensitivity movement. For example, prior to the 1990s it was not uncommon for adolescent boys to refer to other boys as “queers, fagots, or fags.” Such name calling is a form of bullying, and schools are now very strict in disciplining the use of inappropriate language. Likewise, corporate America has discovered that bias against all kinds of minority groups is bad for business. So, overt discrimination against members of the LGBT community is not tolerated.

There are numerous descriptions in The Bible of what we now call LGBT behavior. These descriptions occur both in the Old and New Testaments. A surface reading of these passages would suggest to the casual reader that the Bible does in fact condemn such behavior. However, when these passages are read in context, it is clear that all negative connotations about these persons (who we now refer to as LGBTs) are always secondary to a more primary message. For example, Christians who feel that people of the LGBT persuasion are sinners, typically quote from the Old Testament book of Leviticus at 18.22: “You shall not lie with a male as with a woman; it is an abomination.” On the surface, this verse seems pretty straightforward. However, if we are to have a full understanding of the verse, we must know the context in which the verse is written. The full context of Leviticus paints an entirely different picture of what this verse is intended to mean.

There were two primary reasons for this verse being in the Bible. The first reason involves difficult living conditions. This verse was written at a time when Israelites (and all humans) were struggling just to exist. The Israelite community was subject to attack and enslavement. They needed numbers for safety and to build their society. The average age at death for adults was in their forties. The growth of their community was important to their survival. Life was so desperate that women typically had children in their early teens, and many women died from child birth. In short, life was very hard, and the Israelites benefited from everyone contributing to the expansion of the community. Simply put, a male who did not father children was not contributing to the growth of the tribe. The context in which this verse is written is secondarily about gays and primarily about survival. 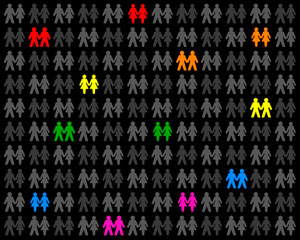 The New Testament also has several discussions of what we now call LGBTs. One example is the following pronouncement by the apostle Paul. “Their women exchanged natural intercourse for unnatural, and in the same way also the men, giving up natural intercourse with women, were consumed with passion for one another. Men committed shameless acts with men and received in their own persons the due penalty for their error.” [Romans 1.26-27] Reading this verse by itself would suggest that Paul is condemning non-heterosexual lifestyles, but this is not literally true when read in context. What Paul primarily is condemning is any passionate pursuit of the flesh in lieu of a passionate worship of God. Paul believed that the world as we know it would be ending soon, probably in his lifetime, and that Jesus would be returning to separate the righteous from the unrighteous. For this same reason he said that it was not necessary for heterosexuals to get married (and thereby avoid all sexual activity). His caution against matters of the flesh was secondary to his passionate worship of God.

Most Christians feel that Jesus, himself, did not address the subject of what we now call LGBT behavior. This belief may not be entirely correct.

In the Gospel of Matthew, Jesus is quoted as saying the following: “For there are eunuchs who have been so from birth, and there are eunuchs who have been made eunuchs by others, and there are eunuchs who have made themselves eunuchs for the sake of the kingdom of heaven.” [Matthew 19.12]. In Biblical times, and even today, the word, eunuch, is used in many different ways and describes a variety of sexually different men. So, at first, it is difficult to understand the exact meaning of this scripture. However, the context in which it is written helps us understand that Jesus is using eunuchs as an example. To Jesus, eunuchs presumably have less sexual desire than most heterosexuals, are less interested in matters of the flesh, and therefore are better able to serve God. Primarily, Jesus is discussing family life and the difficulty that any one person has in pursuing the kingdom of heaven when one is looking out for one’s family.

The comparison in this verse between eunuchs and LGBTs is interesting. Both are sexual minorities. The comparison is especially poignant in the first part of the verse when Jesus states the following, “For there are eunuchs who have been so from birth…” There is no negativity or condemnation at all in Jesus’ words toward people who are in a small sexual minority. In fact, Jesus is referring to them metaphorically with praise.

As a Christian seeking understanding, I have read all that The Bible has to say about LGBT lifestyles. I conclude that sexual preference is a secondary issue in all of the Biblical references to LGBTs in both the Old and New Testaments. The Bible is not against sexual preference on a moral basis. To say otherwise is to read Biblical verses out of context. It is encouraging that more Christian churches now are opening their collective minds and doors to sexual minorities because sexual orientation is irrelevant to the Christian message.

We, human beings are very good at many things. Unfortunately, one of the things we are good at is discrimination. Jesus knew this. That is why he was so passionate in his story of the Good Samaritan. That is why he posited what we call the golden rule of doing onto others as we would have them do onto us. That is why a basic theme throughout the New Testament is that we should love others as we love ourselves. To discriminate against sexual minorities is clearly incompatible with Jesus’ core teachings throughout the Gospels.