Faithful in the Storm

When Jos was 9 years old, a cyclone like the one that struck Vanuatu last week leveled the village near the island of Kadavu where he was attending a Methodist boys boarding school.  One evening, after an exceptionally still day, the students started hearing a strange sound, like the blowing of a conch shell, coming from the offshore reef.  Within a few minutes a storm so powerful blew up that it disintegrated the building where the boys were gathered for their evening meal.  A teacher told the boys to take shelter in the one concrete building on campus.  Through a terrifying evening Jos sat in a corner of the building, holding his 6 year-old brother wrapped in a wet blanket in his arms.  They sat there, soaked through by the rain, seeing only what was lit up in lightning flashes, as Jos watched the water around him turn red from the blood that he was losing from cuts on his legs. 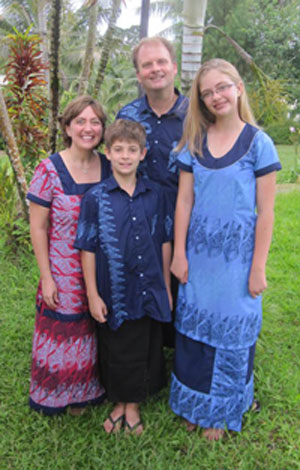 At some point that long night, Jos lost consciousness for loss of blood.  His body was swept into a pile of debris that had clogged a storm drain where it lay until the next morning when a search party found him. He was the last person found (all the boys, miraculously, survived the storm) when the head master, seeing the school Bible in a pile of debris, picked it up and found Jos breathing faintly underneath. One week later, when he was recovering in the hospital in the capital, he received a visit from a very memorable figure. Ratu Mara, Fiji’s Prime Minister at the time, who came to give him a blanket and thank him for his courage in protecting his brother. What Jos did not know then, was that, 18 years later, he would work for this same man as head butler in the Presidential palace.

All this was a prelude to Jos’ arrival at Davuilevu Theological College last year.  After 17 years of serving as a butler for 3 different Presidents, he finally responded to a call he had heard as a young man, left his home on the Palace grounds, and his good salary, and a life in which he could buy his children everything they needed “that same day,” as he puts it, and entered as a first year theological student. Jos is class captain for the second year students and has a clear sense of his call to ministry.  It is a call to restore the Church in Fiji’s sense of reverence for God.  Comparing himself to Nehemiah in the Bible, who also served as a King’s butler (he is quick to point out) he wants to rebuild the walls of the Church, which God has called to “be holy, as I am holy.”

It is our prayer that Jos’ sense of reverence for the God who saved him as a boy, and who has used him to serve presidents as an adult, will be shared much more widely than in Fiji alone.  Thank you for your gifts and prayers that help to make his vision a reality.

Thank you as well for the prayers and gifts that you have sent to support the relief efforts in Vanuatu. Fiji was spared the worst of Cyclone Pam - but knows all too well, the devastating effects of a hurricane.  This Palm Sunday, the Methodist churches in Fiji are donating their Palm Sunday offerings to the people of Vanuatu.  Thank you for your faithfulness in and through the storm.  We are proud to be your missionaries.