Do you know the meaning of “tit for tat,” or the origin of the saying? It's tempting to assume that this little phrase is another way of saying 'this for that' and, in a way, it is. 'Tit' and 'tat' are both the names of small blows which originated as 'tip' and 'tap.' These are recorded by Charles, Duke of Orleans in a book of poems that he wrote while captive in England after the battle of Agincourt and first published circa 1466: "Strokis grete, not tippe nor tapp." 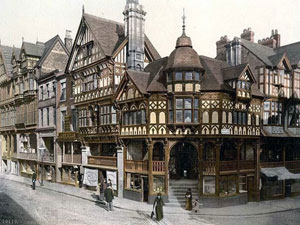 The widespread unconcern about spelling and pronunciation in the Middle Ages led to 'tip,' 'tap,' 'tit' and 'tat' all to variant spellings. John Heywood appears to be the first to have used 'tit for tat,' in the parable The Spider and the Flie, 1556: "That is tit for tat in this altricacion [altercation]." (a noisy argument or disagreement, esp. in public).

In the 20th century, 'tit for tat' was the source of the Cockney rhyming slang 'titfer', meaning hat. The renowned lexicographer of slang Eric Partridge listed that in 1930, in Songs & Slang of the British Soldier: “Tit-for, tit-for-tat, that is, hat.”

This usage was popularized by the British comedian Tommy Trinder who, although he was born several miles from the sound of Bow Bells, in Streatham, London, and hence not strictly a cockney, exemplified cockney style to most people. He was rarely seen in public without his titfer tat.

Most recently still, 'tit for tat' has been used as the name of the strategy in the classic logic problem of game theory, the Prisoner's Dilemma. This strategy, which has since been applied successfully in many real life situations, recommends a like-for-like retaliation as the most rewarding response to duplicity by one's opponent.

So now that you know the meaning of tit for tat, that is exactly what the United Methodist Women will be doing with the Mission Group – we will help them with their rummage sale in April, and they help the UMW with theirs in October, thus “tit for tat”. We would like to invite all the UMW to come and help with the Mission’s Rummage Sale the week of April 27th and there will be a pizza party on the Tuesday of that week for those working. Please come and help out whenever you can of that week. Missions will appreciate your help, and so will the UMW.
And now you have had your history lesson for the day.