A Little About Diane Vogan

The United Methodist Women has given Diane many opportunities for growth and leadership. Past positions include San Diego District and Cal-Pac Secretary of Program Resources, Conference Nomination Committee, Mission-U Children’s Study leader, and Vice President of the Western Jurisdiction. Foothills UMW sisters make sure that she doesn’t have too much extra time on her hands. “Let’s Make it Happen” in April will be her 7th Assembly. Also, she has chaired the UMW Rummage Sale for the last few years. She also teaches Sunday school, sings in the choir and is involved with the Craft Circle of UMW. 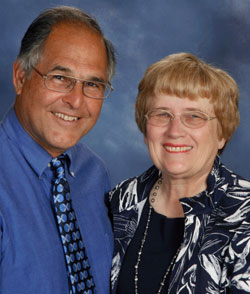 After graduating from Fresno State, she became a first grade teacher. She has been Girl Scout Day Camp Director for 30 years. This year the camps she will be assisting in are “Wildlife Wonders” (with an overnight at Sea World), “Imagine That” (Challenger Space Program, science, and the physics of Disneyland), “Cool Skates” (ice skating), and S’mores (a traditional camp for 200). She also serves as a Girl Scout volunteer, trainer, and American Camping Association accreditation visitor. She loves working with children, especially through camping and informal learning experiences. Camping is a way to bring people together for fun, fellowship, education, outdoor experiences, leadership opportunities, and the passing on of positive values.

Diane is married to husband Norm, has three children and six grandchildren. Her son Ken and his son Kenny ring bells at Foothills. Roger, another son is currently serving in Afghanistan with the Army, and Tanya, their daughter, is a counselor at Vahalla.

Thank you, Diane, for all that you do for our church and UMW, and congratulations on your election!